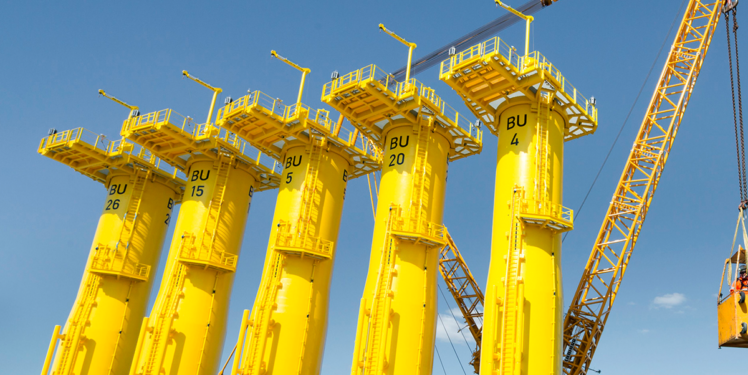 Efficient use of materials and a long lifespan are important KPIs in the optimization of offshore wind turbines. For future, larger support structures, which are particularly expected in wind farms at greater water depths, the behavior of the foundations, in other words the soil properties together with the soil-structure interaction, and the overall dynamic behavior of the turbine will play a central role in the exact calculation and estimation of the lifespan. Accelerated lifespan tests can provide important insights for both the foundation and support structures as well as for components or connection elements of the support structure. In the case of large monopiles, for example, changes in the horizontal load-bearing behavior can occur under cyclic loads and lead to uncertainties regarding the fatigue strength of the overall turbine. Valuable findings in this regard can be derived from large-scale model tests in the sandy soil typical of the North Sea floor that Fraunhofer IWES has been conducting at the Test Center Support Structures in Hannover (TTH) since 2015.

Fraunhofer IWES tests support structures such as monopiles in a large-scale model. The scientists do so by conducting static load tests in a ten-meter-deep foundation test pit with the help of suitably powerful servo hydraulic actuators. The foundation test pit is located at the TTH and used in cooperation with the Leibniz University Hannover (LUH).

A typical loading frequency with servo hydraulic actuators for cyclic loading tests on monopiles in the foundation test pit is about 0.3 Hertz (Hz). For individual load levels with, for example, 100,000 load cycles, this gives a test duration of 92.5 hours each. The time required for a full series of tests can thus be considerable, which is why checks are required to establish whether test objectives could also be attained with fewer load cycles or whether higher load frequencies would be realizable.

Alongside servo hydraulic actuators, the electrodynamic shaker is also available as a second loading option (2). It is equipped with linear drives which accelerate a mass along a straight travel path, thus generating the desired reaction force and setting the system into harmonic oscillation, for example. The IWES employs the shaker for experimental modal analyses, allowing it to draw conclusions about changes in the foundation properties from differences in the natural vibration behavior. The load spectrum here is very variable. The forces that can be achieved are limited by the size of the reaction masses, their maximum acceleration, and, especially at low frequencies, by the usable travel distance.

Electric vibrators are a third loading option (3) for load application. In this system, three-phase asynchronous motors are fitted with rotating and adjustable unbalance masses and operated via frequency converters. A control unit can be used to connect two pairs of motors together to form a system. This provides the scientists with a controllable unbalance exciter system that is variable in both its resulting action quantity and in its direction of action at a given speed.

The advantage of a resonance-based load is that an abutment is no longer required. In the above-mentioned resonance-based loading options (2) and (3), a loading situation under a given medium mean load is therefore not readily possible. As both the direction and magnitude of the loading can be specified with the third loading option (3), in other words the electric vibrators, a flexibly applicable and durable loading system is thus available at the IWES. Compared with a servo hydraulic load, the system results not only in shorter test times but also in a dynamically increased load. If a tenfold increase in load frequency and an amplification of the structural load by a factor of 10 achieved under dynamic excitation are assumed, ten times more load cycles can be realized with significant energy savings. If, in addition to the amplification factor and the higher load frequency, the high, unneeded power requirement of a hydraulic system is also taken into account, the result is possible efficiency increases of around 1:1000.

Experiences in the ResoWind project

In the ResoWind research project, the IWES employed resonance-based test methods for the first time at the TTH and tested them on a steel tube structure in the clamping field, see Figure 1. The experts tested the control system used for this purpose to determine its applicability. The above-listed functionalities of an unbalance exciter system comprising two pairs of motors were successfully evaluated.

A design for a resonance-based test on a large-scale monopile model was developed in the foundation test pit, see Figure 2. All of the above options for loading the monopile were employed, see Figure 3. In particular, the unbalance exciter system was compared with the servo hydraulic loading system by measuring the load levels of the resonance-based system in the form of stress oscillations at the base of the tower and retracing them in comparable load levels or oscillation paths using the servo hydraulic loading system. Strains on the tower or in the pile as well as the reaction of the soil were recorded using pore water and earth pressure sensors. The horizontal accelerations and the movement amplitudes occurring in the load plane were recorded using laser distance sensors for observation of the structural dynamic behavior. The data are now available to the scientists for further analyses and targeted optimization of the loading system.

The IWES scientists derived numerical models in advance to determine the size of the test system and estimate the dynamic structural reactions. The measurements are now being used for further verification of the test system. They are also available for the validation of different model properties such as

Validated numerical simulation models of the foundation system will make it easier to predict the effects of changing soil properties on the interaction between the foundations and the overall turbine more accurately.

Further information can be found here: