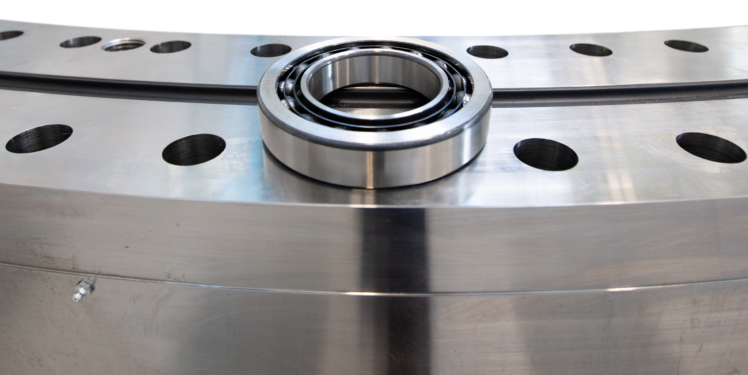 The operating conditions for rotor blade bearings of wind turbines differ significantly from most industrial applications. At Fraunhofer IWES, this has led to the development of the world’s most comprehensive testing technology for blade bearings.
An interview with Christian Broer

Christian, where did the challenge lie with blade bearings in wind turbines?

The current state of science and technology does not allow for blade bearings to be designed in a reliable, standards-based manner. The operating mode is too far removed from known applications. That became clear to us years ago (Blog article Matthias Stammler part 1). With the expected growth in turbine size, the uncertainty of the design could only lead to more problems. So how is the energy transition supposed to work, we asked ourselves. That is why we looked for approaches to improve the design situation by, for example, generating more findings. Part of this approach involves the development of test methods and technology to ensure the reliable operation of the blade bearings.

When one considers the installation situation of today’s blade bearings, it is essential also to bear in mind the attachment parts – the rotor hub and rotor blade. We developed the first test setup with and for Senvion true to scale with hub and blade. Even though we were able to gain really good insights here, we wanted to take a more fundamental approach in the next step and achieve a greater level of independence from the components from a single manufacturer.

What has become of the first bearing test bench?

We dismantled the BEAT2.1 after the measurement campaigns with Senvion because the test concept failed to convince us. The degree of independence from the real blade and real hub in the test gives us flexibility when it comes to test orders. After all, not every customer can or wants to provide the corresponding hub and blade. In addition, we need considerably less space. Colleagues from the sector have now set up a similar concept to the BEAT2.1 in Lippstadt, Germany, which, however, is not only outdoors but also considerably larger. Google Maps isn’t the only place it can be admired.

What were your next steps?

First of all, we built our second blade bearing test bench, which can do without the essential parts of the bearing, namely the blade and hub. We simulate the necessary properties of the blade and hub individually and can thus create real test conditions for bearings with a diameter of up to 6.5 meters. This enables us to carry out accelerated endurance testing over several months with only minimal space requirements.

We also came up with a name for our bearing tests quickly: BEAT! Bearing Endurance and Acceptance Test. To differentiate between the tests, a dimension and consecutive number are added. BEAT6.1 thus refers to a 6 meter bearing diameter and test bench no. 1.

We use BEAT6.1 to test various rolling bearings for a 7.5 MW wind turbine in order to gain insights into damage during real operation. Since we didn’t have the patience to run a 20-year endurance test, we developed an accelerated test program that simulates this time in 4 months. Matthias Stammler addressed this topic in his PhD. However, costing around € 100,000 per unit, the test specimens are too valuable for the statistical validation of the tests, because this would require a lot of test specimens. Some client’s bearings of prototype wind turbines have already been run on the 6.1 setup (www.iwes.fraunhofer.de/de/forschungsprojekte/aktuelle-projekte/hapt.html).

How do you safeguard the research results instead?

That’s where BEAT0.1 comes in, a tabletop unit for 7220 bearings. For this, we scale the loads and can therefore also test high quantities. This is important for the scientific validation of the results. We can also use it to get to the bottom of individual special situations or simply run through a test matrix with different load scenarios. However, with these small bearings we lose typical and important characteristics of a large bearing. We are therefore currently taking a further step to combine the real test situation of the BEAT6.1 with a larger number of tests. For this purpose, the “little brother” of BEAT6.1 is being developed as BEAT1.1 (www.iwes.fraunhofer.de/de/forschungsprojekte/aktuelle-projekte/ibac.html). The test matrix comprises 120 bearings: small enough to generate statistically verified results and just large enough to map the characteristics of large bearings. Content-related questions on condition monitoring and control concepts will be added here.

Do you have any more new topics?

In addition to mapping and testing the real operating situation of the blade bearings, we are also researching further findings by means of principle testing. We want to approach damage mechanisms and defined operating situations separately and with a scientific focus. In addition to damage caused by wear, rolling contact fatigue is becoming increasingly relevant for the service life of blade bearings. To this end, we have designed the test method and the corresponding running test bench with axial, hydraulic load application: BEAT2.2 is currently being put into operation.
With BEAT0.2, a twin to the 0.1 version has been created, thus increasing the test capacity. With a dynamic control for axial load superposition, BEAT0.3 is set to offer a technical upgrade. This will involve improvements in the operation of rolling bearings in wind turbine gearboxes.

All in all, that sounds like a successful test bench series!

For us, the test benches are impressive, individual tools for gaining scientific knowledge and validating components and processes. The trick lies in the individual test methods, for example for acceleration, scaling, highlighting, and preventing a damage mechanism. Yet all this is only possible thanks to the support of an extremely dedicated team spanning a range of disciplines: control engineering, tribology, load calculation and simulation, mechanical engineering and automation, craftsmanship, and project management. Together, we want to boost the reliability of energy use from wind and, in doing so, influence the costs on society of the energy transition.

Last but not least: Where are the testing infrastructure and the team located?

The six test benches and the core team are housed at the institute’s site in the Large Bearing Laboratory in Hamburg-Bergedorf . The Hanseatic City of Hamburg provided us with a lot of support in choosing the location.

Thank you for taking the time to talk to us Christian!