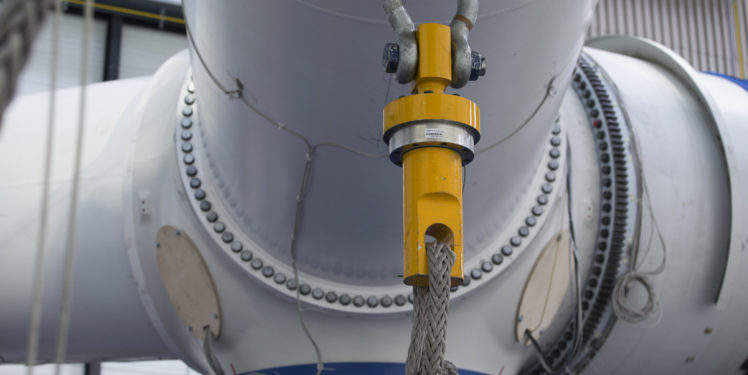 The first milestones on our journey to a blade bearing test are described in part 1. In mid-2013, we submitted a project outline with the name HAPT – Highly Accelerated Pitch Bearing Tests. The project comprised more than €10 million of funding and had a term of five years, so it’s hardly surprising that it took some time to review our project plan.

At the same time, however, a wind turbine manufacturer for whom we had already tested rotor blades approached us and asked us to test blade bearings. In order to test the blade bearings, we needed space for another test bench. Our rotor blade halls were the only available option at the time. When designing the test bench, we worked on the basis that the real interfaces had to be retained as far as possible – as such, the hub, blade, and pitch drive were taken from the turbine. This project also required some lead time, but the BEAT2.1 blade bearing test bench was finally commissioned in the 90 m hall in October 2015. Videos on this can be found here and here.

The test bench was not intended to be used for endurance runs, but some of my ideas concerning blade bearing tests were included in the test program for the first bearing. We checked the frictional moment, the static deformation, and attempted to monitor the development of a lubricating film using ultrasound sensors. We learned a lot especially about monitoring of the lubricating film, even though we were unable to generate usable results. One of the errors here was that the test program for measuring the lubricating film thickness was based too heavily on existing research work – the movements of the pitch drive were relatively small with constant amplitude and were probably not able to produce a real lubricating film.

Another unexpectedly complex point was the measurement of the frictional moment. The frictional moment of a bearing is the most important variable when designing the pitch drive of a wind turbine. The drive on the test bench was fitted with a torque measuring shaft. Said shaft did not measure the frictional moment directly, but rather the moment of the pitch drive – the differences between them are huge. The drive moved not only the bearing but also the blade. The blade weighed about 12 tons and had a center of gravity that was not exactly on the axis of rotation of the bearing. Thus, depending on the pitch position, there was an additional moment that was also evident in the torque measurement. To make things even more complicated, the blade became deformed as a function of load and pitch angle, meaning the distance of the center of gravity from the axis of rotation was not constant. Our measuring system at that time allowed the direct insertion of calculation channels as well as the formulas to calculate out the influence of the center of gravity. The result: lots of lines with formulas. In addition, there was the issue of load application: The rope used to transmit the force also did not pass through the axis of rotation of the drive, and its upper point of application was also dependent on the pitch angle and the load. As we also used the rope to vary the load angle, there were multiple possible starting positions. Days spent mulling over the problem together with design workshops helped us to eliminate these influences from the frictional moment.

After the first bearing tests on the test bench, we were able to test the central thesis for a later endurance run program. Namely: All cycles which are potentially harmful can be run in direct succession to accelerate a test run. To put this to the test, we tested two bearings. One ran 40,000 cycles at constant amplitude, the second also ran 40,000 cycles, but these were part of real pitch angle progressions and therefore frequently interrupted by larger movements. In other words: The last test resulted in the blue and red progressions of the image in part I on this topic.

Had this thesis been correct, both bearings would have had to have looked the same after the test and have had visible signs of wear on the raceways. The result here: One bearing looked as if it were fresh out of the factory and the other displayed considerable signs of wear. The bearing that had completed the time series for the wind turbine was completely undamaged. The result was very clear and debunked the original thesis. This suddenly rendered an awful lot of research work into oscillating bearings irrelevant for our application. The sequence of cycles was decisive for the development of wear and it is not representative to perform all critical cycles directly one after the other.

Part 1: Rapid testing of blade bearings – but how?