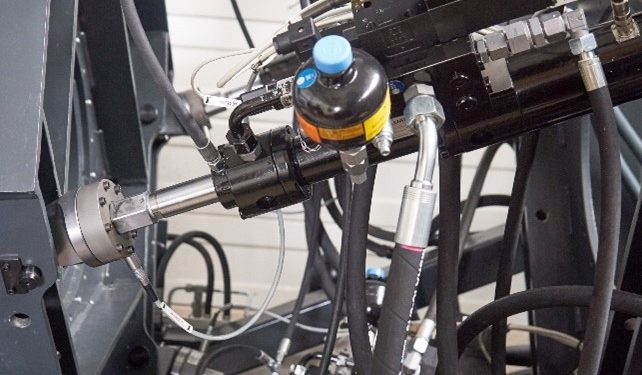 The Fraunhofer IWES has commissioned a development environment to test mechanical application for research purposes. Improved control concepts and mechanical issues can thus be tested more quickly more cost-effectively and in parallel with productive operation. With this, the IWES is expanding its spectrum of services in the field of mechanical load application on the nacelle test bench at the Dynamic Nacelle Testing Laboratory (DyNaLab) in Bremerhaven. For example, the nacelle test bench enables grid tests and hardware-in-the-loop (HIL) wind load simulations to be performed under realistic conditions.

At the DyNaLab’s full-scale test stand, we test the nacelles of wind turbines in the laboratory on a scale of 1:1. A central advantage here is that it is not necessary to wait for suitable wind conditions, as these can instead be simulated via drive and load application. This laboratory environment renders planning more reliable and less expensive for test and certification campaigns. The time to market is shortened.

The concept of load application via a hexapod on this scale was unique when the DyNaLab was commissioned back in 2015. We were entering unchartered waters and faced new challenges during the planning stage: for example, moving a 70-ton hexapod with its six cylinders dynamically in such a way that loads can be applied to the shaft of a mounted wind turbine in a targeted manner to simulate rotor blade loads.

To improve and develop the DyNaLab’s load application system (LAS) continuously, the idea of switching to a scaled test bench which would allow time-independent advance testing and trials emerged. A scaled development environment also promised greater independence from heavy transports and mobile cranes. Conversions could be carried out more flexibly by the facility’s own technicians. The control strategy for the next client could be programmed and tested simultaneously on the scaled development environment whilst the current test campaign is still running on the DyNaLab. One of our suppliers developed a prototype for the hexapod before construction of the DyNaLab nacelle test stand in order to validate the control strategies and the selected hardware in advance. This prototype included the control components and source code for the DyNaLab large-scale test bench. The tests using the prototype confirmed that the combination of automation technology and hydraulic control worked both precisely and dynamically.

Since these considerations were incorporated into the LastVal – Validation of an MN force application system research project, which started in 2018, they were also subject to systematic, scientific testing. The LastVal project enabled us to mount a calibration unit on the DyNaLab test bench. This provided us with an independent reference system against which the applied loads in two test campaigns could be compared. Additionally, in turn, it proved possible to improve the accuracy and also the dynamism of the nacelle test bench’s hexapods.

We are already running the testing scenarios which we conduct on the DyNaLab with a mounted calibration unit in the scaled development environment. This allows comparisons to be made. Following successful commissioning, the scaled development environment is now also available for research applications. At the IWES, we also have exciting subjects for student work. We are employing the scaled development environment in the current research project “VirtGondel – Development of a digital copy of the nacelle test bench to create advanced testing methods and more efficient testing campaigns”. We are using this environment to be able to model and validate the subsystems, such as hydraulics, structure components, and load application control of the DyNaLab, on a scaled equivalent in a targeted and accelerated manner. At the IWES, we are continuously developing and testing further optimizations which we then incorporate into our research.