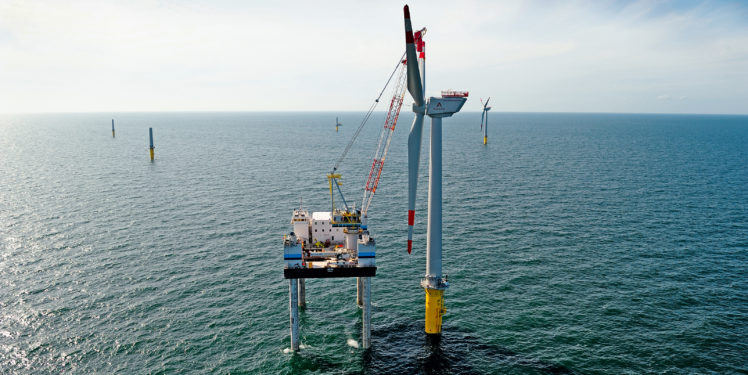 An ambitious measuring campaign has been under way at the alpha ventus offshore wind farm ever since it was installed back in 2010. The measurement data from the wind turbines, the substation, and the marine environment are available to scientists all over the world via the Federal Maritime and Hydrographic Agency (BSH). These data can be used to investigate a wide variety of different issues concerning the maintenance and operation of offshore wind farms. Anyone interested will have the opportunity to find out more about the RAVE research work in a workshop held on January 28, 2021.

alpha ventus, the first offshore wind farm in Germany, opened in 2010 and received around €30 million in federal funding. At the time, alpha ventus was the wind farm furthest away from the coast in the whole world at a water depth of approximately 30 meters. The turbines employed were also some of the largest available on the market back then.

In parallel to the construction of the wind farm, a research initiative was also founded: research at alpha ventus (RAVE). RAVE has since conducted more than 30 research projects at alpha ventus and data from the wind farm have been collected continuously – especially on four wind turbines equipped with a wide variety of sensors. They are available to researchers all over the world via a simplified data usage method since 2019.

The data archive maintained by the BSH contains measurements collected from more than 1,200 measuring channels distributed all over the entire wind turbine: from the foundations to the blade tip, from bending moments and accelerations to temperatures and wind speeds and directions up to power output. Data from the substation are also available in the research data archive. An overview of the measurements can be found here. The Fino 1 measuring mast, which is located in direct vicinity to alpha ventus, delivers additional, detailed environmental data.

The use of offshore wind energy is increasing all over the world, but there are only a few wind farms that have been in operation for considerable periods of time. Commercial wind farms also do not make data freely available for research purposes, although that is exactly what is needed to help offshore wind energy prosper around the world and give as many researchers as possible the opportunity to improve the design and operation of offshore wind farms. RAVE offers researchers precisely this opportunity with its research data archive and contributes to a climate-neutral energy system in doing so.

The Fraunhofer IWES has been closely associated with alpha ventus and RAVE since its beginning – as a research institute active in a wide range of fields such as corrosion protection, wind measurement and simulation (currently in the X-Wakes project), and the electricity grid as well as in its role as coordinator of the entire research initiative. The Fraunhofer IWES has already organized three conferences and hosts annual workshops on the research work. The workshops are free and open to anyone interested. The next workshop will be held online on January 28, 2021, and present the latest RAVE research in the fields of loads and environmental conditions.